An informal group of musicians has been gathering for more than 20 years on the shore of Burntside Lake for a week of impromptu folk jam sessions. Now another generation is getting into the act.

ELY, MINN. A banjo twanged through the birch trees. The night was dark, but a dim light illuminated the porch of Cabin No. 1.

Mosquitoes buzzed against the screens, drawn by the musicians within -- or maybe by their music.

On the porch, Ben Agar sat in an old wooden chair with his back to the cabin door and played the banjo. Two others strummed guitars. Someone's hands blurred over a hammered dulcimer, and someone else tucked a fiddle under her chin. Another danced, her feet pounding the beat on the porch's worn floorboards.

Each year for more than 20 years these musicians have gathered here at Camp Van Vac on Burntside Lake outside Ely for a week in the summer. And each night during that week, they play folk music -- Irish, American, Scandinavian.

Some of the musicians are family. Some were friends and band-mates before coming here. Some became friends after they heard music and walked over from other cabins to join in.

The makeshift band on the porch slid into a new tune, but nobody could remember its name.

Inside the cabin, the musicians' children -- ranging in age from mid-teens to mid-20s -- occupied another corner of the world. Three girls and a boy sat on the couch, wrapped together like a burrito in a gray down sleeping bag. They, too, laughed, but at jokes of their own.

The music? Their parents? Those grownups? Background noise.

Music on the dock

When the weather is good, the musicians play on the wide dock down by the lake. Some take up spots on the moss-and-lichen-spotted granite point that rises like a whale's hump behind the dock.

As Joe Alfano fingered a nyckelharpa -- a Swedish key fiddle -- Ben Agar set his banjo on his knee and plucked its strings.

Though it was still morning, the sun was already hot. Water slapped against aluminum fishing boats bobbing at the dock. A faint scent of iron rose from the clear water, mingling with the odors of pine and bug spray.

Mary Imsdahl walked Bailey, her 7-year-old golden retriever, to the point. The wind blew steadily there, just a few yards from the sheltered lagoon.

Mary's folks had found Van Vac through a friend back when Mary was 2. Once there, they found the music by accident. Mary is 17 now, with long brown hair that looks reddish in the sun.

She loves bluegrass. And Latin music. And jazz. She's a percussionist -- a member of the all-state high school band. Later this summer, she'll play in the all-state jazz band.

She and some friends have started a band of their own, covering songs by the Beatles and the Strokes.

The other musicians' children are musical, too.

But this music? This folk music? They don't play that, much. Will the traditions here die when their parents stop playing? 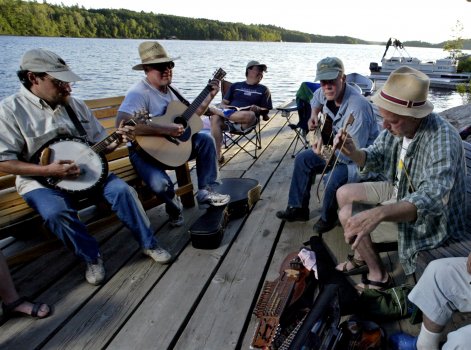 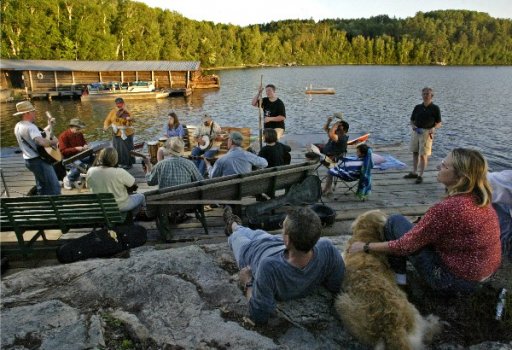 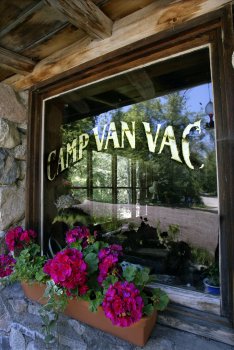 In the evening, the musicians pulled their benches close together on the dock and started to play.

On the granite hump behind them, Jackson Agar and his sister, Asha, 22, snapped digital photos. Below them, on the dock, the folk music hooted and trilled.

The folk musicians played on. Their only audience was a few older campers who'd come down to the dock.

And then the band gained a generation.

Mary Imsdahl walked toward the docks from the direction of the cabins. She carried bongos and an African drum. She was smiling. And she wanted to play.

As her hands tapped out time to the older folks' folk, Jackson Agar listened. He set down his camera. He picked up a washtub and a pole -- a "gut-buster" bass. He scrambled down the rocks, plopped the washtub next to the older musicians and started thrumming in time.

Just like that, the future of folk music at Van Vac didn't seem so uncertain.

When the group flew into "Wipe Out" and Mary's hands pelted her drums in a blurring solo, the commotion on the granite slope stopped.

Everyone listened. A little later, when Jackson and Chris premiered their latest rap on the dock, the entire gathering -- old and young -- erupted into applause.

Old and young, they played until the sun dipped between the trees and slipped into Burntside Lake. Mosquitoes swarmed and bit. Crimson fringed the sky. Stars peeked from the growing blackness.

And the banjo, and the bongos, and the bass echoed down the darkening paths to the cabins.